Dr. Joe Lambongang, Executive Director for Growth Aid, who led the team from the NGO to the ceremony said, GrowthAid saw the need to respond to the emergency need of providing sustainable Water, Sanitation, and Hygiene (WASH) services to help prevent and manage some Neglected Tropical Diseases (NTDs) prevailing in the communities of the Municipal and District Assemblies.

GrowthAid’s work in the area is a follow-up from last year where it supported 9 communities in the Lower Manya municipality with 8 new boreholes and rehabilitate 10 non-functioning ones integrated with hygiene promotion and sanitation facilities and the capacity building of community based management structures.

Dr. Lambongang assured the assemblies of GrowthAid’s maximum commitment to support the two Assemblies to improve access to safe water no matter how hard they are to reach and called for maximum support and commitment from all stakeholders in the Assembly to make this dream possible.

The District Chief Executive (DCE) of Upper Manya Krobo District Assembly, Hon. Odjao Felix Nartey expressed his heartfelt appreciation to GrowthAid for coming to the aid of his people living in the hard to reach areas who are deprived of safe water, adding that the assembly would offer its continued support. He further stated the issues of Buruli Ulcer, Bilharzias among other diseases are critical in these communities and hopes with the intervention of GrowthAid, these diseases can be prevented. He pledges his support as well as the District to support this partnership and to makes this project a success in their assembly. 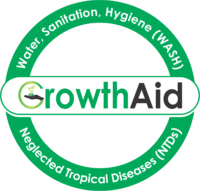